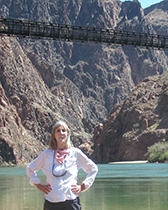 Susan Thistle's main area of interest is sociology of the environment, and how different groups are reshaping our relationships to the environment, both in the United States and elsewhere, in the 21st century.  She has also started a new program, Field Studies in Environmental Issues, at the Friday Harbor Marine Laboratories on San Juan Island in the Pacific Northwest, about 90 miles north of Seattle, Washington.  Students can spend Fall quarters at the Labs taking a variety of courses for credit at Northwestern, and carrying out independent research on environmental issues.  In her earlier work, Susan looked at how different groups shaped the interaction between families and an expanding market economy.

Her book From Marriage to the Market: The Transformation of Women's Lives in the Late 20th Century United States, addresses the relationship between gender and economic and political development, providing an understanding of the deeper structural alterations underlying women's movement into the labor force in the years after World War II, and the profound changes in family structure, women's lives, and social policy which have accompanied this transition. Thistle has taught and developed such courses as "Food, Politics, and Society" and "Social Change and the Environment."

From Marriage to the Market: The Transformation of Women’s Lives and Work
University of California Press, 2006