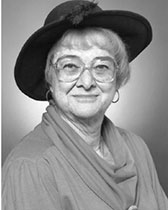 Sociology of work/occupations and Studies in Education

Arlene Kaplan Daniels, whose colorful, witty, and generous presence enlivened the field of sociology, died in her sleep on January 29, 2012 at the age of 81. She was active in the SSSP, first as Editor of Social Problems (1975-1978) and later (1986-87) as President. She also served as Secretary of the ASA and as President of Sociologists for Women in Society. A well-published sociologist of occupations and women’s work, Arlene had a keen sense of social justice and mentored a wide circle of younger colleagues and students.